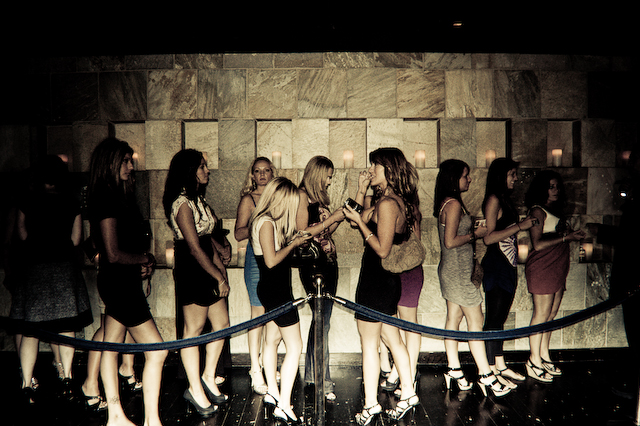 If you’ve ever spent time down at a Las Vegas pool, you would kind of get the sense that clothing is all but a requirement. While these establishments have dress codes in place, they can essentially be broken down to one rule: Wear as little as possible. This certainly makes planning a day at the pool fairly easy, but you’ll be surprised at how difficult things can get when the sun starts to set and you’d like to move the party inside. Every nightclub in Las Vegas seems to have its own rules and regulations when it comes to its guest’s mode of dress and it may get to be a daunting task to pick out an outfit that can be interchangeable for each club. When dressing for a night of club hopping, there are several things you should prepare for.

The first thing you’ll want to know is that you will be hard pressed to find a nightclub in Vegas that allows for casual attire, so toss your baseball cap and favorite sports jersey aside when planning your night out. Though jeans are more than welcome in all clubs, you’ll want to pass on anything shredded or overly baggy if you plan on actually making it indoors. Although jeans may be appropriate, that jeans and a t-shirt look is a sure-fire way of ensuring you spend the night at the penny slot machine next to Edna, the chain smoking 70 year old with bad body odor. In terms of nightclub attire, T-Shirts (no matter the style) are more then frowned upon – they’re the anti-club attire.

Next, you want to remember that you are more than likely going out to impress a member of the opposite sex. Just because you’re allowed to wear something doesn’t mean you should. You’ll also want to make sure you stand out in the crowd without looking like a complete fool. In what will probably be a sea of plain button-down shirts, you’ll want to accessorize with something small and subtle like a tie. Most nightclubs allow hats that fall outside the spectrum of a baseball cap, but make sure to wear something that doesn’t hide your face. The age old myth that women are attracted to mysterious men does not apply in Las Vegas – here, they fear them.

In terms of allowable footwear, this is where the lines get fuzzy. While most nightclubs are growing more lenient as to what they allow to grace their dance floor, you never want to not make it in due to something as small as a sneaker. Tennis sneakers are typically frowned upon unless they have a “dressy” look to them. Giant logos, multicolored surfaces, and funky shoelaces are the polar opposites of what a doorman is going to want to see. You’re safest bet is to go with something polished and comfortable.

Just keep in mind that if the doorman doesn’t like what you’re wearing, they won’t let you in. While your wallet would be more than happy to not have to pay the club’s cover charge and your feet would be fine with not being stepped on all night, the potential enjoyment of the night would dwindle greatly.